I was looking to build an RFID detector which would work with 125khz and 13.56Mhz frequencies, this detector will alert the owner that their card is being read. In addition to this I have a few more ideas up my sleeve.
Firstly I have to say a big shout out to Corey Harding. I started this journey, getting in contact with him at the start of the year, and so proud we have something to show for it.   He is an awesome human being and has been inspirational and supportive. I seriously wouldn’t be where I am now if it wasn’t for Coreys countless messages helping me learn what I needed to. I would often ask a question, get a very helpful response and go away for a few days trying to understand the answer, go back and let him know my progress, with always a warm response.
I always like to create my own tools, or remake them so I can understand the basic concepts whilst learning. So in a bid to do this I managed to put a basic circuit together over the course of a weekend.
I took inspiration from the RFID Tilt Sensitive Detector and also Corey Harding’s RFID Detector
Kit used : Some copper slug tape from Bunnings ( well Maplin is shut down – and you know you get the days where you just want to build, no matter how hard it will be because you don’t have stuff…yeh it was one of these days!)
The was the stuff I could have played with that weekend and yet I decided to do this.

A 220 pFcapacitor was used, in the tutorial it says to use an 82, but once again it was all I had, but it worked in the end! I have a tendency to use and adapt what I have around me at times, this time is was a capacitor I stole from a Lan Star Tap kit.
Due to the tape being single sided conductive and having adhesive which interfered with the connection, I soldiered the joins on the tape to make sure the connection was good.

Yes I know it looks a mess, however baby steps and after a few frustrating hours. I managed to get it working 🙂 Currently it picks up Mobile phone NFC frequency 13.56Mhz range as it is less forgiving. The below picture shows me testing it with a battery. 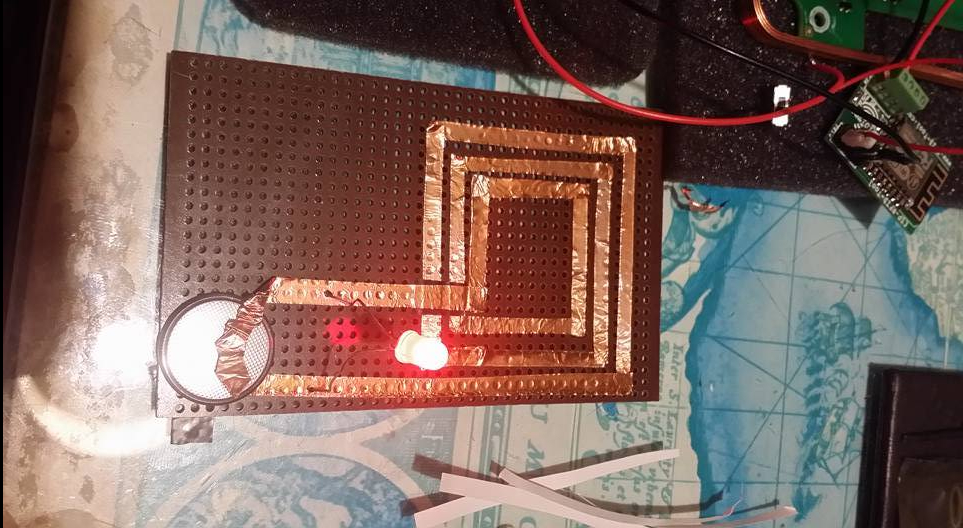 In order to get it to pick up the 125khz, I will need to improve the antenna and experiment with the capacitors. Looking at this blog post By Dave Kruschke it gives some further insights to the capacitors and how I can experiment to increase the range also.
It was a good build day, and in addition to this, when I went into the hardware store to buy a multi-meter and some copper tape, the lads behind the counter funnily asked me if I was making a bomb, which then led to some backwards and forwards banter.
By the end of the conversation I had learnt that he was just about to start uni and was really interested in the cyber security industry, of which by the end of the conversation I had told him all about OWASP, BSides and various hacker groups to keep an eye out for.
As you know, you can learn most from a supportive community around you and the big smile on his face told me he was really grateful for the tips I had given him. Hopefully I’ll see him at his first con soon.
Update: Progress made. From home lab to professional build.
So after further discussions with Corey Harding, we were able to come up with a plan of action. He has kindly created the custom PCB boards which light up small L.E.D’s when a signal is detected. Below shows one of the proof of concept pictures. 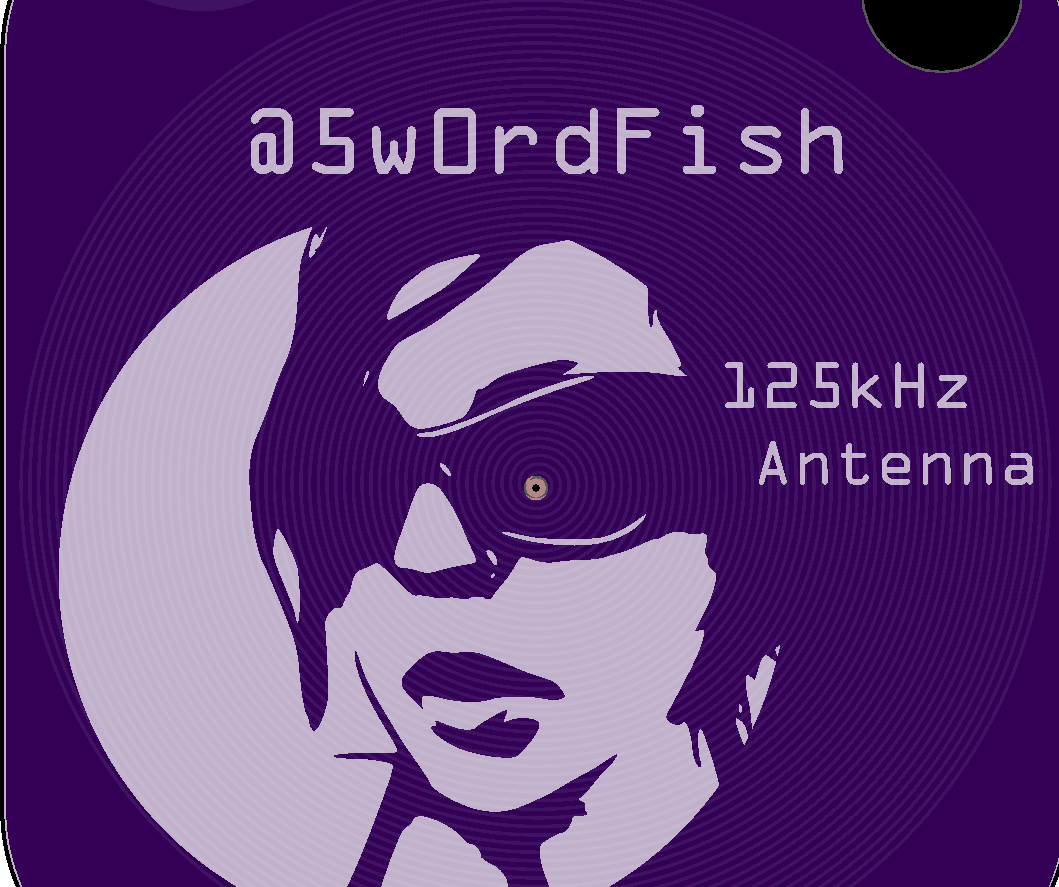 We decided on a design and in addition to this I asked him as a surprise gift if he could print up the red coloured boards with Sharkas icon on it. They look amazing. They all have additional holes which can be used for lanyard holders.
Below shows some of the boards whilst in development. Corey added the final touches and spent the time testing once they had be developed. 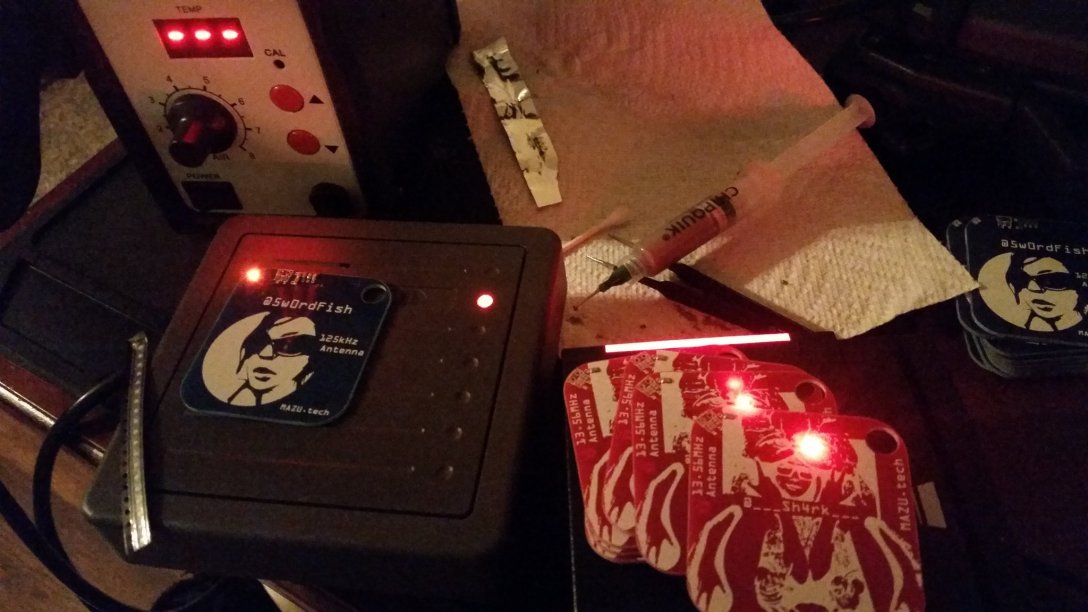 He sent a package of RFID goodies to me in the post from USA along with a selection of my very own custom printed boards. 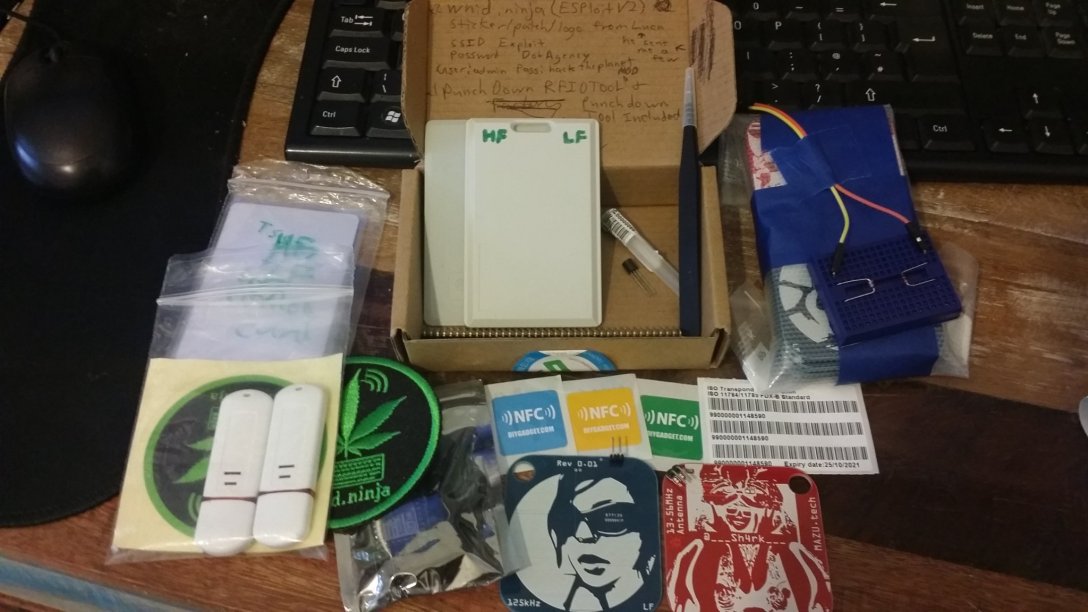 I had asked him to make up two variants, The blue is for the low frequency and the red is for high frequency devices.

I am currently working on these further, so instead of a light coming on, I will be using buzzers, bluetooth and different ways etc to send a message to the person that has the RFID detector, to let them know that a signal has been detected.
Stay tuned for updates 😀